August: ERA completed analysis and reported findings to the Idaho Falls Chamber of Commerce Board of Directors. The findings determined the City of Idaho Falls has the necessary infrastructure, population size, income and overall demographics to support a regional multi-purpose event center with an anchor tenant to bring in conventions, trade shows, concerts, professional sports, youth sporting events and family shows. A link to the study can be found here: ERA Final Report

September: Based on the strong results from this study, the Chamber Board was tasked with establishing an advisory committee to further evaluate the data, funding options and necessary requirements to establish an Event Center.

LOCATION:
1) Where will the Event Center be built

March: A press release invited community members to suggest sites and local landowners to submit proposals of properties to be considered. Each proposal detailed the practicality of each site, as well as the ability to meet general criteria such as: 1) access to utilities; 2) vehicle access; 3) road and infrastructure costs; 4) site exposure; and 5) overall image.

May: Twelve sites were submitted with locations ranging from large green fields, Historic Downtown, the Hotel District (Lindsey Boulevard/Utah Avenue),and developments like Snake River Landing and Sunnyside Crossroads. The advisory committee immediately disqualified two sites due to their lack of infrastructure and the high costs associated with establishing water, sewer, and power to the site. Two additional sites were disqualified due to: a lack of quality access; inadequate parking; multiple owners or parcel assemblage problems; as well as possible demolition or destruction of property with relocation of current facilities. The committee then created a matrix which evaluated the eight remaining sites against the following key criteria:

The committee evaluated each site using the matrix and a scoring system.

October: The advisory committee had narrowed the list of sites to the three most promising options. ERA evaluated the three finalist sites using their own independent criteria. They found all three sites to be strong candidates with the Snake River Landing (SRL) site scoring highest. This high score was due to its location, high visibility, and integration into the overall mixed-use development with master-planned elements such as restaurants, retail, theater, office space, pedestrian areas, and significant landscaping. The proposed site consists of a 20.54 acre parcel which provides easy access via I-15, Sunnyside Road, Snake River Parkway, and Pancheri Drive. The aerial view of the property can be found here: EVENTCENTER LOT

VISION:
2) What will the Event Center look like and what functions can it provide to the community?

The goal of the committee was to create a venue that would attract new business and visitors to the community while enhancing the quality of life in the region. They envisioned a facility with a sports team as an anchor tenant. The Event Center would include ice capability sufficient for professional hockey and the flexibility to serve as a convention/conference center, host trade shows, regional sport championships, concerts, entertainment and graduations. The intention of the committee was to attract events not currently accommodated in the region that would compliment local facilities.

COST:
3) How much will the Event Center cost?

Project costs are most often broken down into hard and soft costs.  The hard costs are approximately 70% of the total cost for a project such as an event center, which is primarily construction costs. The soft costs make up the remaining 30%.  Approximately half of the soft costs are for expenses including architectural and engineering design fees, permitting, fixtures/furniture/equipment, special inspections, financing, legal fees, etc. The other half is mainly land cost. The property will be acquired through a generous land donation from a local business owner. Therefore, the land donation represents a very significant savings to the project. It is not until an Architectural firm is hired and plans are drawn up that a more firm cost estimate is established.

FUNDING:
4) How will the Event Center be funded?
Various funding options will be considered.

January: The Greater Idaho Falls Chamber of Commerce sends out a a Request for Qualifications (RFQ) was sent to local and national architectural and engineering firms for a multi-use events center.

May: A press conference begins the petition process of creating an election for development of an auditorium district.

June: CRSA and Sink Combs Dethlefs Architects had determined the size, functional qualities, and preliminary design approach for the Event Center. Study data supported a conservative approach to the number of seats and venue size (5,000 fixed seats) with a projected cost of $35-$40,000,000. This was considered to be a cost conscious approach for a project of this size and square footage including the land donation.

March: The petition process for election was completed and filed with the Bonneville County Elections Office. District Judge Dane Watkins authorized an election for Tuesday, May 17, 2011, for the purpose of creating an Auditorium District for the construction of an Event Center. The election resulted in a victory with 63% of voters in favor the Idaho Falls Auditorium District.

May 17, 2011: Citizens of Idaho Falls vote to establish an auditorium district, giving the power to establish a 5% hotel tax (Passed with 63% of vote)

December: The Board met with representatives from Greater Boise Auditorium District (GBAD).

January: Board members toured the Maverik Center in Utah and sent RFQ’s for Accounting services.

March: The Board met with Pocatello-Chubbuck Auditorium District (PCAD) Board and toured event centers in Prescott, AZ and Rio Rancho, NM.

May: Accounting contract was awarded, web developer identified and the District solicited and reviewed Operator RFQ proposals. A building and planning committee was established and Cindy Ozaki, Chair, was designated spokesperson for the Board of Directors.

August: Centennial Management Group (CMG) was chosen to manage and operate the Idaho Falls Event Center and soil samples were taken at the site.

September: The board designed and selected the logo for the District.

December: Board adopted Policy III: Public Records and began survey and plat work at the site.

January: The board adopted 2013 budget and identified the web domain name as IdahoFallsAuditoriumDistrict.com.

February: The District joined the Greater Idaho Falls Chamber of Commerce. The District received a clean opinion on their annual audit.

March: The City of Idaho Falls Planning and Zoning approved a C-1 designation and an Administrative Coordinator was hired.

August: Design development began to address aesthetics, design detail, and materials. The current conceptual site design can be found here: IFEC_color Site. The board researched investment options for tax revenue and voted to maintain the FDIC insured amount at a local bank for operating expenses and invested the remaining tax revenue in the Local Government Investment Pool (LGIP).

February: The board adopted 2014 budget. The District received a clean opinion on their annual audit.  Chairman Ozaki and Kevin DeKold testified in favor of the CMGC (Construction Manager/General Contractor) bill during Senate Hearing Committee. The bill passed the Senate and was sent to the House.

March: Chairman Ozaki gave testimony in favor of the CMGC bill during the House Hearing Committee. CMGC Legislation passed 64-4-5. CRSA discussed construction scheduling for hockey to be played by fall of 2016. Dirt work, bridges and canal work would be done this calendar year. Discussion and decisions on roads to be determined. Robb Chiles resigned as board member. Mr. Allan Woolley was appointed to fill his vacancy in accordance with statute. Executive Director Search Committee was established.

April: CMGC Legislation signing by Gov. Otter was attended by Cindy Ozaki, Chair, and Kevin DeKold of CRSA. (picture below) The Board participated in the Mayors’ Business Day. District adopted Policy VI: Separation of Duties. District receipts show growth of 9% since first of the fiscal year through the end of February. Further discussion on property annexation. 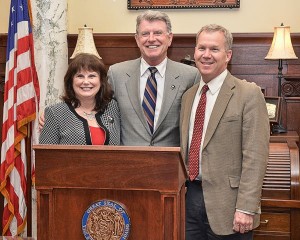 September: Yellowstone Teton Territory (YTT) reports that Idaho Falls is up 18% in visits and is looking to secure more state funding for tourism. YTT is already promoting the 2017 solar eclipse. Mr. Everhart filled the open board seat left my Mr. Kris Meek. Bitrick Consulting was hired for the Executive Director search.

November: Mr. Isom announced that Home 2 Suites is building in Snake River Landing and a fall opening is anticipated.

December: The District continues to show positive growth in receipts. Rudd and Company will provide the District audit again this year.

February: Stakeholder and HARN (High Accuracy Reference Network) meetings were held. The District partnered with City, State, and Federal representatives for HARN relocation. Rudd and Company offered an unmodified or ‘clean’ opinion for the 2014 District audit.

April– HARN (High Accuracy Reference Network) marker will be removed and relocated at no expense to the District. IFAD and IFEC featured in 2015 East Idaho Business magazine. 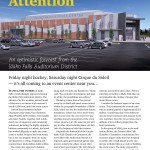 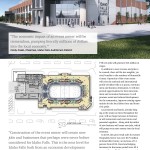 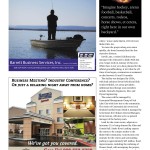 October – no meetings in October

November – Mr. Bob Everhart resigns from Board after moving from the District.

May – IFAD board meeting start time permanently changed from 7:30 a.m. to 7:00 a.m. Memorandum of Understanding reached between IFAD and Centennial Management Company. A Request for Qualifications for a Transient Room Tax Study was released.

June – The new Board consisting of Robert Nitschke, Jill Kirkham, Doug Swanson and John Lobuono were sworn in and oaths signed
Training for the new Board Members was conducted

January – Board begins interview process of the candidates selected for the Executive Director position.

February 27, 2018 – voted to accept and approve a development agreement with Pioneer Front
Properties, LLC, a subsidiary of Ball Ventures, LLC which confirmed the donation of 23 acres of land located in Snake River Landing, for the construction of a multi-use events center.

February 27, 2018 – selection of Convention Sports & Leisure International (CSL) of Minneapolis, Minnesota as the firm to conduct a new feasibility study on behalf of the District.

April 27, 2018 – Approved a development agreement with Pioneer Front Properties to build a road that would lead up to the future event center.

October 29, 2018 – Construction begins on Event Center Drive a 5-lane street, which will allow access to the future event center

February 2022 – Donor beam signing event.  Special thanks to all sponsors: